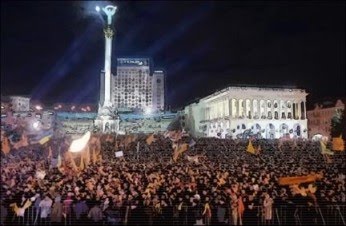 EUOBSERVER / COMMENT - As the EU fetes the new government of Ukraine in a string of diplomatic encounters, there is one question on the lips of the EU side that no one has the nerve to ask: is Ukraine still a democracy and does it really aspire to European values?
In view of recent events it would be easy to believe that the spirit that inspired 98 percent of the population to vote for an independent and democratic Ukraine in 1990, and the hope that again inspired 250,000 people to flood Independence Square in 2004, is no more. But is this really so?

Absolute power backed by virtually unlimited financial resources is now in the hands of the president and the people he chooses. Ukraine has become a classic oligarchy, with the opposition offering little more than empty rhetoric. While in power, for whatever reason, the opposition achieved precious little in terms of election promises. They campaigned vociferously to remove the immunity of parliamentary deputies, but when in power they used their immunity to follow in the footsteps of those before them. Nothing really changed. The ideals of the Orange Revolution were betrayed.

Today, negotiations to raise the ceiling for political parties to enter parliament from 3 percent to 7 percent could ensure that in future just two parties get in. The constitutional checks and balances for a functioning democracy, with a government and an opposition, have already been weakened by the new administration, as deputies brazenly sell their votes to the highest bidder. The last semblances of democratically elected, party-based politics are fading, only to be replaced by what will one day be a one-party state ruled not by the people, but by a self-elected, self-styled elite, ruled only by the power of money. Some say Ukraine is simply adopting the Russian model. But who gave the politicians the mandate for such change? Where was the referendum to enable the dismantling of Ukrainian democracy in favour of an oligarchy? There was none. Power has simply been stolen.

The real defence of the constitution should have come from the Constitutional Court. But it has become a mockery and failed to uphold its constitutional obligation to be independent and to offer justice. The civil courts now administer justice to the highest bidder to the degree that there is little point in seeking justice. The whole judicial system is on the verge of collapse if it has not already failed.
One might expect at least some comment from the EU. But instead it welcomes our new leaders, condoning by its limp rhetoric what is happening. It fights wars in the name of democracy, but says nothing to uphold democratic principles being threatened on their very doorstep.
Corruption is now the only way to get anything done. But the cost of doing real business has reached levels unacceptable to both domestic and foreign investors. So, instead of Ukraine rising to the economic levels predicted in 1990, it languishes in poverty, while those who have bought power divide up the spoils of an ever decreasing cake. The Ukrainian economy is, according to both the IMF and the World Bank, 30 percent smaller than it was in 1990 after the collapse of the Soviet Union. Some 78 percent of the population now live below the poverty line. The GDP per capita is only 13.67 percent of neighbouring Slovakia, barely 50 percent of Belarus and only 4 percent higher than Georgia, which is still recovering from war. Shockingly, 34.5 percent of the population would now be happy to emigrate and with negotiations proceeding on an EU visa-free zone, Ukraine could become a major European problem if the status quo prevails.
So, what is the future?
The future offers a number of scenarios. One suggests that the current autocratic government will clamp down on just about everything until the country literally chokes. This would suit those who want to turn Ukraine back into Little Russia with a one party system and absolute power at the centre. But Ukraine is no Russia and Ukrainians are not as subservient as Russians despite what those in power choose to believe. This leads me to explain a more likely scenario - one that is born from Ukraine's turbulent past.
For 350 years before independence, Ukrainians were forced to live at somebody else's behest. We were abused, deported, enslaved and millions were starved to death. We were invaded, sent to prison camps, gassed in concentration camps and subjected to depravities that even Hollywood has yet to depict. Yet we survived.
Had we not tasted independence and freedom, I dare say the plans of those in power would once again subject us to more indignity. But unlike our northern neighbours we have tasted freedom, we have voted for democracy, we have enjoyed freedom of speech and freedom of assembly. We have mobile telephones and the Internet. We can communicate with the outside world. About 14 million of us travel abroad each year and have seen and tasted what freedom means. We can see the real benefits of democracy just across the EU border.
My forecast is that people will express themselves in non-violent ways. Already we have resurgence in grassroots civic society groups, which have sprung up to defend Ukraine's young democracy. Whether it is by peaceful street protests, internet referenda or strike action, the people of Ukraine will prove they are not ready to be silenced. Even if the West continues to ignore our plight, the voices of protest will continue. They will last until the government understands that Ukraine is a democracy ruled not by an oligarchy of 450 people, supported by corrupt judges, but by a population of 46 million, the same 46 million that voted for an independent democracy in 1990. Ukrainian democracy is not dead: it's just waking up to the reality of what it means to lose it.
The writer is the Chief Executive Officer of the People First Foundation, the former deputy secretary of the National Security and Defence Council of Ukraine and an advisor to three Ukrainian presidents and seven prime ministers