Why would exotic Oman suddenly become so attractive to Zelensky? 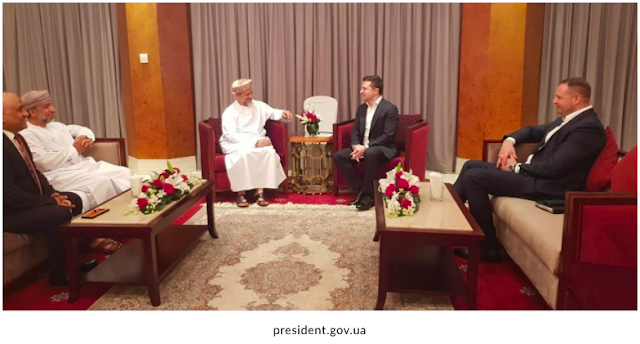 It looks like Zelensky could have a secret meeting with Russians there, presumably with Surkov, responsible for implementing the Minsk agreements, and Kozak, responsible for economic and political merging with Ukraine?

This could be a sign that Putin tried to manipulate Trump and Pompeo into getting involved in the conflict in the Middle East instead of increasing support to Ukraine during Putin's call to Trump at the end of the year.

According to the official version, Putin called "to thank Trump" for offered years ago information on potential terrorists attack in Russia.

Obviously, it was just a pretext to supply Trump with some  "intelligence" meant to instigate him into action. However, it doesn't look Russians are happy with the result.

Putin would prefer a full-fledged war between the US and Iran, exhausting both and rising twice the oil prices as it happened after the French attack against Gaddafi in Lybia, not a point strike that favors the U.S. It is clear, that  Russia will work to correct the situation.

The Oman meeting explains why Zelensky hurried so much with implementing 'Paris agreements' after meeting Putin which de facto meant "harmonization" of Ukraine's political system with Russian and economic take over of Ukraine.

Putin's demands included denigration and persecution of Ukraine's defenders, signing favorable to Gazprom agreement, changing the Constitution, adopting the land and citizenship laws and others, meant to favor Russians and to weaken Ukraine's sovereignty - everything in a turbo regime.

In Oman, Zelensky has received a new portion of Putin's orders, which could be dubbed "Oman agreements" which he will start to implement with renewed enthusiasm.

Why? Oman is an offshore jurisdiction ignored by the U.S. as insignificant. Therefore it is popular with Russians. Meeting in Oman means that Zelensky had received generous "incentives" (promised by Putin in Paris) on his newly created offshore accounts to fuel his accelerated actions for capitulating Ukraine to Russia.

Is Ukraine lost for the U.S.? Not yet. However, did Trump and Pompeo trade Ukraine for Venezuela?

Today during the briefing on developments in Venezuela, Pompeo accentuated the "politics of hemispheres",   designed by Russians to divert the U.S. attention from Ukraine.

By losing Ukraine the U.S. would lose Europe. In fact, after Brexit, the U.S. did start losing Europe exactly as Putin planed. Brexit was meant to transform the European Union into the Eurasian Union under Russian control.

Temporary concession in Venezuela Russia could easily reverse as soon as it would increase its potential by annexing Ukraine.