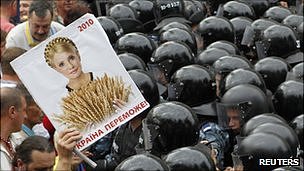 Thousands of people have protested in Kiev against the trial and detention of Ukraine's former Prime Minister Yulia Tymoshenko.
The march took place on the 20th anniversary of Ukraine's independence, overshadowing official celebrations.
The demonstrations were dispersed after a stand-off with police in riot gear.
Mrs Tymoshenko is charged with abuse of office. Her supporters see the trial as a political prosecution designed to stop her running in future elections.
Some Western governments, including the United States, have also expressed concern that the case against Mrs Tymoshenko is politically motivated.

Jail threat
Up to 5,000 protesters gathered in a park in central Kiev and began marching towards the presidential administrative buildings before the police broke up the march.
Several hundred protesters regrouped later in the main Independence Square of Kiev, where extensive official celebrations were taking place.
Mrs Tymoshenko is specifically accused of coercing the state gas company Naftogas into a deal with Russia's Gazprom in 2009. Her trial began in June. If convicted, she could face up to 10 years in jail.
Last year, Mrs Tymoshenko narrowly lost a close presidential race against Viktor Yanukovych, a long-standing rival.