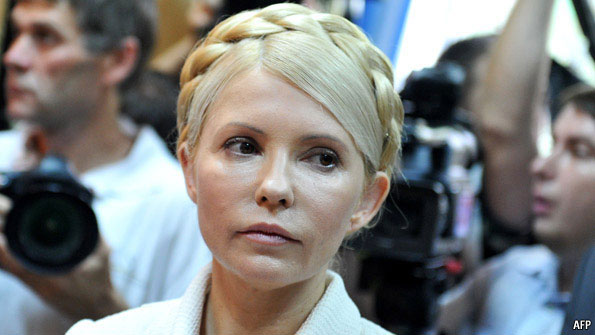 YULIA TYMOSHENKO is on hunger strike. According to a statement posted on her website, the jailed Ukrainian former prime minister stopped taking food on April 21st at a state hospital in Kharkiv. After refusing to be taken from prison to hospital until she had seen her lawyer, she was brought there by force. That much local prosecutors have admitted. But Ms Tymoshenko alleges that that force included blows to the stomach; prison officials deny any such violence.


And so a new chapter opens in the saga of Ms Tymoshenko's imprisonment and ill-health. Now back in prison after refusing treatment for her back problems, she says she will maintain her hunger strike at least until her allegations are properly investigated.
Ms Tymoshenko and her team have a blunt but effective approach to public relations. Every twist in the tale of her imprisonment and poor health is exploited to keep her story in the headlines. Her website statement is characteristically dramatic: "I thought these were the last moments of my life", she writes.
The damsel-in-distress tone, coming from someone who for years was a tough player in the corrupt world of Ukrainian politics and business, can sometimes grate. Brutal though its tactics may be, it seems deeply unlikely that the regime of Viktor Yanukovich, Ukraine's president, would go so far as to kill Ms Tymoshenko, especially as Ukraine is just weeks away from hosting the international Euro 2012 football tournament.
Yet the situation is undoubtedly grave, and does deserve the world's attention. Ukraine is sliding rapidly from a semi-democracy to an authoritarian kleptocracy, and an inefficient one at that.
Ms Tymoshenko's spokespeople point out that they thought it unlikely, only a few months ago, that Mr Yanukovich would send his rival to prison. Or that he would seek to keep her there even when it so obviously, and calamitously, undermines his aim of bringing Ukraine closer to the European Union.
Yet the persecution continues. A corruption trial against Ms Tymoshenko opened last week, probably in the hopes that such charges would prove more palatable to European diplomats than the abuse of office conviction under which she is serving her current seven-year sentence, widely seen [link in French] as politically motivated.
The EU has frozen a proposed "association agreement" with Ukraine, which would count as the country's biggest-ever step towards European integration, until the situation with Ms Tymoshenko and other jailed opposition figures is resolved.
Why does the regime insist on apparently working against its own interests? A desire for personal vengeance, whether on the part of Mr Yanukovich or others close to him, may be part of the explanation. After all, Ms Tymoshenko posed little danger to Mr Yanukovich after losing the 2010 presidential election to him. Her chances of mounting a democratic challenge to the president and his Party of Regions would have been slim.
Instead, amid growing evidence of her mistreatment, and after confirmation by a team of German doctors that she needs urgent medical attention for a herniated disc, public sympathy for Ms Tymoshenko is growing (although the most salient information from Ukrainian opinion polls is that most Ukrainians dislike all politicians).
What might this all mean for October's parliamentary elections? This week Ukraine's two main opposition parties, Ms Tymoshenko's Batkivshchyna (Fatherland) and the Front for Change, led by Arseniy Yatsenyuk, a former parliamentary speaker, pledged to field joint candidates in the poll.
If joined by UDAR, a party led by Vitaliy Klitschko, a boxing champion, the new alliance could win about 30% of the vote. The Party of Regions is on about 20%, according to the Razumkov Centre, a polling group.
But many fear October could bring a return to the bad old days of ballot-box stuffing. Widespread fraud was reported at recent local elections. Similar allegations were heard after regional elections in autumn 2010, just months after a presidential vote widely recognised as free and fair.
There is a permanent base of Tymoshenko supporters encamped outside the court in Kiev where Ms Tymoshenko received her prison sentence last October. There are usually more tents than people. Yesterday, after the news of Ms Tymoshenko's hunger strike emerged, a small crowd gathered there.
But there was little evidence of the fighting spirit that Ms Tymoshenko's statement had sought to muster (she called on her supporters to "eliminate" the regime). Vladimir Gonskiy, the camp co-ordinator, simply said he was deeply worried, and called for foreign intervention in the form of sanctions. It may yet come to that.
« Czech politics: Wobbled but not toppled
Polish bureaucracy: The Vogons of the east »