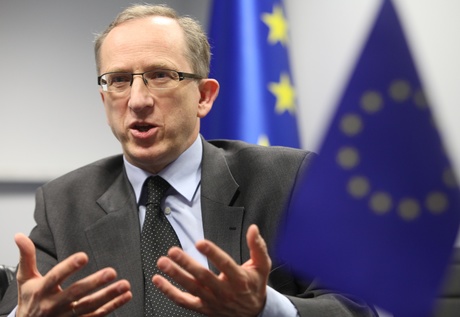 Jan Tombinski took up the post of European Union ambassador to Ukraine in September as Ukraine’s relations with the 27-nation bloc were becoming increasingly strained over human rights and other issues. This year, meanwhile, is potentially momentous for the Ukraine-EU relationship, with a summit coming up on Feb. 25 in Brussels. By year’s end, Ukraine hopes to sign an Association Agreement with the EU.
Before being posted to Ukraine, Tombinski headed Poland’s mission to the EU. He has also served as Poland’s ambassador to France. The polyglot diplomat speaks English, German, French, Slovenian and Czech.
His skills and experience will come in handy in starting a new page in relations with the EU. His predecessor, Jose Manuel Pinto Teixeira, riled government authorities with his candid assessments about corruption, democratic regression and the unfriendly business climate in Ukraine since President Viktor Yanukovych took power in 2010.

By contrast, Tombinski has kept a low profile since his arrival four months ago. In one of his first interviews in Ukraine, the Polish diplomat told the Kyiv Post on Jan. 23 why he doesn’t talk frequently to journalists on the record. He also shared his views about how Ukraine-EU relations can move forward. Additionally, he talked about recent developments in the case of imprisoned ex-Prime Minister Yulia Tymoshenko and the prospect of punitive sanctions coming from the West against Ukraine’s leaders.
Kyiv Post: In the situation where Ukrainian authorities remain persistent in engaging in what many see as political persecution, possibly threatening the signing of an Association Agreement with the EU, what way out do you see?
Jan Tombinski: We did see, as well, the firm and formal commitment from all people who are in charge of Ukrainian policy, including the president, about the will to continue the path of European integration. The question of political (persecution) and selective justice has been addressed in the mission of European parliament envoys, two presidents, (former President of the European Parliament) Pat Cox and (former Polish President) Aleksander Kwasniewski... This is a solution which is very much on the minds of everybody in European Union. This is a question of finding systemic solutions to how the people who are in political responsibilities are accountable for their decisions…. I’m here not to be frustrated or to be a person who is already criticizing. I’m looking for solutions.
KP: Why do you think dialogue, that has failed for the last year and a half, will work this time?
JT: There are people, who are (here) because of public mandate, because of being elected, because of being in (positions of) responsibility, they bear responsibility for the country and they will be accountable not before me, (but) before history and the Ukrainian people. So I try to pass the message that a success of Ukraine will be also their success.
KP: After the departure of your outspoken predecessor, Ambassador Jose Manuel Pinto Teixeira, what kind of diplomacy will you use?
JT: Everyone has their own way, their own skills. First, what I saw that’s necessary, was to establish a mood of trust between me and the people who are from different political opinions, different political camps, in order to communicate freely and to communicate openly… My way to convey messages is to convey them directly to interlocutors who bear responsibility for the country: people from parliament, people from the administration of the president. This is my way of working. To be direct in close contacts, because the risk of passing messages by intermediaries... I have all my sympathy to journalists, (but) it’s probably not always the best one.

EU Ambassador to Ukraine Jan Tombinski
KP:  What was in the final report of Teixeira and did he give you any advice on your new job?
JT: I talked to my predecessor. He gave me his assessment of the situation… But I have to shape my destiny, my way of working, my approach to the media, to politicians, to civil society… I am for more than 20 years in diplomacy and I’ve been ambassador for 17 years, so I also have a certain experience in addressing people, getting engaged with people... We had very interesting talks with Jose Manuel Pinto Teixeira in Brussels…
KP: Have the incidents over the public criticism from the Ukrainian Foreign Ministry of Teixeira and the former French ambassador to Ukraine been resolved?
JT: In diplomacy there are some good habits and some good advice. And you have also to shape your minds, shape your messages... I know very well Jacques Faure, the (former) French Ambassador (to Ukraine), who is a friend of mine as I was ambassador to Paris. But I will not comment on the way (Teixera) was (treated), I was not here. I can’t judge it from the outside … about what happened. You see only some elements of the mosaic.
KP: What was on the agenda of your recent meeting with Prosecutor General Viktor Pshonka, after Yulia Tymoshenko was accused in the 1996 murder of Donetsk lawmaker Yevhen Shcherban?
JT: We ask him about: first, how all that happened on Friday in the afternoon in the Kharkiv hospital is to be understood in the light of the criminal code? What were the procedures and what is the level of defense of her rights, knowing the state of her health and knowing also that she didn’t have a contact with lawyers at this very day and that notification handed over to her was not made by a prosecution representative but (by) the penitentiary service?.. We decided together with American ambassador (John F. Tefft) to request for a meeting with Yulia Tymoshenko.
KP: If you get a chance to meet Tymoshenko, what will you tell her? And what will you do if you’re denied?
JT: I will tell her what I have to tell her. Then (in case) I will not have a possibility to tell her personally what I wanted to tell her, there are other people who are visiting Yulia Tymoshenko and we may pass messages…We got yesterday a letter from her that she is willing to see us. So I hope the request will be then followed positively by Ukrainian authorities.
KP: If the Ukrainian authorities move on with the new charges against Tymoshenko, will this mean for the EU that the time for sanctions has come?
JT: (It) will be a subject to examination in all member states. And all member states are very closely following the judiciary proceedings against Yulia Tymoshenko as by European institutions, but I will not enter in speculations what happens if. We know where we are now, so we try to adapt out strategy to what is now and there was a clearly stated in all our meetings that a lack of solution to the question of Yulia Tymoshenko and Yuriy Lutsenko is one of the biggest burdens on the way to sign the Association Agreement, but the solution is not in our hands.
KP: Wouldn’t Ukrainian authorities get the EU message – that the way of political persecutions and other human right violations is not the way to the EU - clearer if they have their European visas denied?
JT: I guess everybody got their lessons (when) Ukraine lost several cases with the European Tribunal of human rights (European Court of Human Rights) and this is something which is much more objective than any speculation and lessons should also be drawn of how judiciaries working… No one from outside is able to introduce the reforms, this may only happen inside the country. European Union disposes of political instruments. Political instruments are an offer, we can’t impose, this is not a dominating power that we may decide instead of. This is a choice of Ukraine.
KP: How serious does the EU view Ukraine’s flirtations with the Customs Union of Russia, Belarus and Kazakhstan?
JT: This is not about flirtations; this is about a strategy for Ukraine… The Customs Union will be a shift of sovereignty in decisions about trade on a level of common organs of the Customs Union… With whom should we then negotiate, as European Union the conditions of the free trade agreement, with common organ of customs union of Belarus - is not member of WTO, Kazakhstan – on the way to become member of WTO, Russia – which is member of WTO? It will not be compatible in a sense of the decision of European path of Ukraine.
KP: After Ukrainian authorities failed on their promises to deliver progress on democracy, is there a risk one of Ukraine’s biggest advocates, Poland would give up on its mission?
JT: The only advice would be to enlarge the group of friends of Ukraine, because even two (Sweden and Poland) are not enough to help everything change. One big advice would be to focus also on business climate, Ukraine needs investors and investors may be also a club of friends of Ukraine.
KP: How do you manage to combine such a challenging job and a family with 10 children?
JT: Don’t sing but do it! I have a fantastic wife who is sharing this burden with me and probably taking the most bulk of the burden… (I’m lucky) to have very indulgent kids because they trust me fantastically and they are supporting me all in this works: through all the countries, through all the work we are doing. This is a fantastic asset in life.
Kyiv Post staff writer Maryna Irkliyenko can be reached at irkliyenko@kyivpost.com.