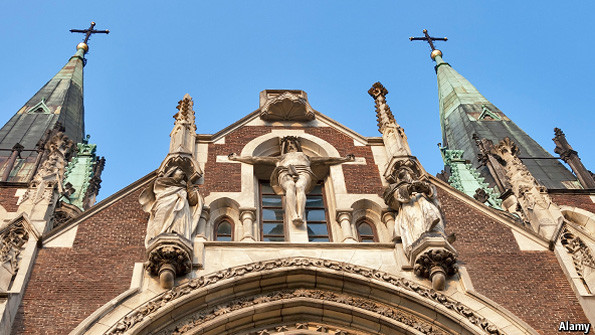 METROPOLITAN Hilarion of Volokolamsk, a bishop of the Russian Orthodox Church, recently expressed  hope that the new pope, Francis, will continue the policy of rapprochement with the Orthodox Church and will not support, what he calls the expansion of the Ukrainian Greek Catholics. “The union is the most painful topic in the Orthodox-Catholic dialogue, in relations between the Orthodox and the Catholics. If the pope will support the union, then, of course, it will bring no good," he said
The metropolitan is worried: it is said that the new pope has an affinity for the Ukrainian Greek Catholic Church (UGCC). So much so that one Russian commentator claimed that in Francis, “we have a Ukrainian pope”. This may worsen relations between the Orthodox and Catholic Church Greek Catholics.

The Ukrainian Greek Catholic Church confuses most outsiders. It is an Eastern rite church that is in communion with Vatican. Drawing on the Christian legacy of medieval Kievan-Rus', it was officially founded through the 1596 Union of Brest (hence the church’s other widespread name, Uniate). “Greek” was added later to distinguish it from the Roman Catholic Church.
Jorge Mario Bergoglio, the new pope, had a Ukrainian Greek Catholic priest as his mentor and is familiar with the Church's rites, says Sviatoslav Shevchuk, the head of the UGCC. Mr Shevchuk previously served in Buenos Aires and got to know the future pope there. Many in the Ukrainian Greek Catholic Church hope that Francis will elevate it to a patriarchate, from its current status as a Major Archbishopate.
Today Greek Catholics make up about 15% of Ukraine's population. Most of them live in the west of the country, including the city of Lviv. (They also have a strong presence in the Ukrainian diaspora.) After almost half a century of persecution under Soviet rule,  the Church resurfaced as one of the pillars of national identity in western Ukraine. It is an influential force here, though it has kept its distance from politics.
Someone once quipped: in the rest of Ukraine, religious people go to church; in Lviv, everyone goes to church. The city is famous for its panoply of churches, most of them now Greek Catholic, though it still has both a Roman Catholic and an Armenian cathedral. (Up until 1941, Lviv was also an important centre of the Jewish religion.) In the mornings the sound of the liturgy, sung in Ukrainian, spills out into the cobbled streets.
Lviv Business School, part of the Ukrainian Catholic University which is affiliated with the [Ukrainian Greek Catholic] Church, has become known for combining business education with ethics. Encouraging “trust, openness and ethics” in the new generation of business leaders can help change negative trends in Ukraine, says Sophia Opatska, the School's chief executive. This is especially important in Ukraine, where “business often takes on social and economic responsibilities that belong to government in democratic countries”, she adds.
On April 7th crowds of Greek Catholics joined a procession through Lviv representing the way of the cross, slowing down the traffic. The Church's leaders have already invited pope Francis  to visit Ukraine. The new pope himself has made no special mention of Ukraine since his election as the Ukrainian media has pointed out. All the same, many of Ukraine's Greek Catholics eagerly await the visit of pope Francis, the closest they have had to a Ukrainian pope.

Email ThisBlogThis!Share to TwitterShare to FacebookShare to Pinterest
Labels: church