No plans to review gas prices for Ukraine - Putin 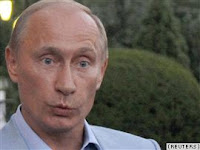 Russian Prime Minister Vladimir Putin on Wednesday dismissed reports that Russia and Ukraine agreed to discuss and possibly review the gas pricing formula.
Ukrainian Prime Minister Mykola Azarov said earlier on Wednesday after a meeting with Putin that they had agreed to discuss the possibility of revising the gas pricing formula that ties the gas price to oil prices, which have been steadily rising.
"We reached no agreement on a price formula revision. Our position is that we have a contract, this contract is in force and it must be implemented," Putin said.
Russia was open for discussions on controversial points in the pricing formula and was ready to examine them, Putin said.
"We are ready to thoroughly look through our agreements once again, and, if they indeed contain clauses that influence the price formula accuracy, then we are ready to examine them," the Russian premier added.

Ukraine's energy company Naftogas expects the Russian gas price to edge up to $280 per 1,000 cubic meters in the second quarter of this year.
On Tuesday, Azarov said it was necessary to speed up the preparation of a new gas agreement between Kiev and Moscow.
The existing contract was signed in 2009 by then-Prime Minister Yulia Tymoshenko. Earlier this week, Ukraine's state prosecutor's office launched a criminal case against Tymoshenko, now an opposition leader, over abuse of power linked to the signing of the contract.
The government of President Viktor Yanukovich, her rival, has long urged Russia to review the pricing formula but talks have not been successful so far. In 2010, Naftogaz and Gazprom signed an additional agreement with a discount of $100 per 1,000 cubic meters.
MOSCOW, April 13 (RIA Novosti)

Email ThisBlogThis!Share to TwitterShare to FacebookShare to Pinterest
Labels: Putin