Raising the stakes of a Russian strangulation of Ukraine’s economy 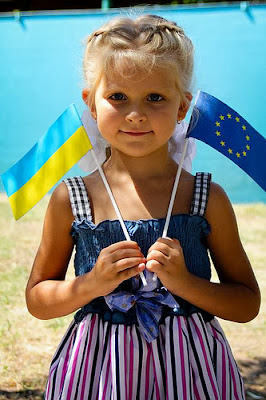 Recent comments by high-ranking Russian officials on Ukraine’s imminent inclusion into the European unification process have led to a Russian-Ukrainian war of words, with some Moscow commentators reacting hysterically.
Russian President Vladimir Putin’s official adviser on economic integration, Sergei Glazyev, said recently that Kyiv’s signature of a political and economic association agreement with the European Union on Nov. 28-29 will be “economic suicide,” a “surrender of sovereignty,” and a “violation of the Russian-Ukrainian Friendship Treaty on which the entire foundation of our relations is built.”
Russia is seemingly preparing a whole battery of “reactive” measures concerning both its exports to Ukraine, above all in the energy sphere, and its imports from Ukraine, in a number of sensitive trade areas.
Large sections of the Ukrainian economy are dependent on Russia. This concerns both the availability of Russian markets to Ukrainian producers, and the delivery of Russian raw materials, including natural gas, to Ukrainian companies and households.
In its current difficult economic situation, Ukraine will be especially vulnerable to Kremlin pressure. Should Moscow use its considerable leverage to the full, the Ukrainian economy would be unable to withstand, and could go into a free fall, with grave social repercussions, including a likely rise of tensions between the Ukrainophone and Russophone parts of the country. All this would not bode well for the fragile Ukrainian state, and raise the specter of separation or even civil war.

In light of such catastrophic scenarios, the EU, its member states and the US should give explicit signals towards Moscow that Russian economic pressure on Ukraine is unacceptable. They should, in particular, make clear to the Kremlin that the costs for a Russian trade war against Ukraine would also include increasing economic losses, diplomatic conflicts and political tensions in Russia’s relations to the West.
While Ukraine’s relative economic leverage regarding Russia is low, the sum of the various trade, investment, financial and other relations between Russia and the West is substantial. The partial dependency of the Russian economy and budget on sustainable cooperation with the West – especially in the energy sphere, but also in a range of other economic, political, scientific and other areas – bestows upon the EU and US special responsibility. The West should use its considerable leverage to raise the stakes of a Russian confrontation with Kyiv. It can relatively easily do so and thereby protect not only Ukraine’s concerns, but also its own interest in political stability in Eastern Europe.
It is reassuring that the politicians in Brussels understand apparently well the urgency of the situation. In one of the most remarkable resolutions of its history, the European Parliament, representing more than 500 million EU citizens, on Sept. 12 stated that “now more than ever, attention needs to be drawn to the alarming pressures in the EU’s Eastern Neighborhood and on the Eastern Partnership project itself, which is being contested and questioned by Russia.”
However, the union has also to make clear to both, its member states and to Russia that its upcoming agreement with Ukraine means not only a new Ukrainian relationship to the EU, but also vice versa. It will make little sense to the Ukrainian elite and population to embark on a painful approximation of their entire to socio-economic system to EU standards, if the union’s member states continue doing business as usual with a Russia that punishes Kyiv for its association with Brussels.
It is primarily this treaty – prepared, pushed and propagated by the European Commission, in the interests of the union’s member states – that currently causes the Russian wrath against Kyiv. The EU has a large share in creating the current situation that may be entailing considerable risks for the Ukrainian economy, society and state.
It is difficult to say yet what exact measures Moscow will take, if Kyiv and Brussels indeed sign the association agreement this or next year.  Perhaps the Russian leadership is not yet certain itself how far it is willing and able to go, in that case.
However, the current war of words is gradually narrowing the range of future options for the Kremlin. As Russian opinion makers continue to accuse the Ukrainian leadership of betrayal, ungratefulness and duplicity, the Kremlin may be locking itself into an escalation that it will find ever more costly to stop.
As the anti-Ukrainian media campaign continues, the likelihood that the confrontation between Kyiv and Moscow gets out of hand increases. The West should as soon and as clear as possible make clear to the Russian leadership the entire array of economic, financial, political and diplomatic repercussions that a Russian strangulation of the Ukrainian economy would have for Moscow. Such an early signal should help Moscow to get a clear picture of the risks it will face in the case of an escalation, and accept the new reality of a Ukraine gradually integrating into Europe.
A more extensive version of this article is forthcoming in the German Council on Foreign Relations’ “IP Journal,” on Nov. 24. Andreas Umland is a DAAD associate professor of political science at the Kyiv-Mohyla Academy.