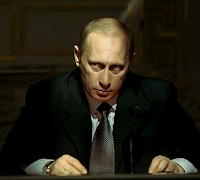 KIEV—Russian Prime Minister Vladimir Putin arrives in Kiev Tuesday to try to persuade Ukraine's leaders to ditch plans to sign a free-trade agreement with the European Union and instead join a Russia-led customs union.
Ukrainian President Viktor Yanukovych has resisted pressure from Russia, and in particular Mr. Putin, to pull Ukraine into its bloc through cajoling and economic offers.
But Russia last week upped the pressure in its attempts to trump months-long EU talks by saying it could offer Ukraine an annual $8 billion discount on gas supplies, setting the stage for a tug-of-war between Brussels and Moscow for Ukraine's allegiance.Ukraine's choice is about more than trade: It is seen as crucial in deciding the geopolitical path of this former Soviet republic of 45 million, wedged between Russia and Europe.
A free-trade agreement with the EU is seen as a stepping stone to deeper integration with the 27-nation bloc; joining the customs union with Russia, Belarus and Kazakhstan would rule out an EU deal and tie it to fellow former Soviet states.
Mr. Yanukovych affirmed his preference for the European deal in a speech to parliament last week, touting it as the starting point for tighter relations and saying he hoped it would be signed by the end of the year. Kiev is also negotiating a deal to allow Ukrainians to travel to Europe without visas.
He sought to soften the blow for Russia by suggesting that Ukraine would seek a free-trade agreement and other cooperation with the customs union.
But as he was speaking, a senior executive from Russian state energy giant Gazprom said in Moscow that Ukraine could be offered gas at Russian domestic prices, a discount of $8 billion a year.
Ukraine has long requested a discount on gas to help it recover from an economic crisis that saw gross domestic product plunge 15% in 2009. A discount on gas prices would be popular with Mr. Yanukovych's powerful industrial backers as it could bring short-term benefits to their companies. It could also allow the government to ease gas-price liberalization for households, part of an International Monetary Fund lending program that has dented the government's popularity.
Benefits from an EU agreement could take longer to be felt, but are potentially greater given the size of its market and the nudge it gives to economic overhauls.
A high-ranking Foreign Ministry official said Ukraine wouldn't be swayed by Russia's offer of "tasty pies we should say thank you for."
The official, speaking on condition of anonymity, said Mr. Yanukovych would aim to convince Mr. Putin that the EU deal didn't contradict Moscow's interests, as Ukraine wants to maintain strong trade ties with its north-western neighbor.
Russia has long used a combination of juicy financial offers and bullying tactics to keep Ukraine within its sphere of influence. Large parts of modern-day Ukraine were for centuries under Moscow's control until Kiev declared independence in 1991, and the Kremlin has reacted aggressively to any steps by its neighbor to pursue deeper integration with the West.
After pro-Western President Viktor Yushchenko was propelled to power by the 2004 Orange Revolution, Russia twice turned off gas supplies, as he irked the Kremlin by pursuing independent, pro-Western policies such as membership of the North Atlantic Treaty Organization.
Relations quickly thawed after Mr. Yanukovych, seen as more Russia-friendly, took office in February 2010 and quickly announced an end to attempts to join NATO.
In May, he agreed to extend the basing of Russia's Black Sea Fleet in a Ukrainian port by 25 years in exchange for a discount on gas prices.
But Mr. Yanukovych balked when Moscow came back with even wider-ranging offers, including merging the countries' state energy companies.
Separately on Monday, Ukraine's authorities increased the pressure on former prime minister Yulia Tymoshenko Monday, with prosecutors saying they had opened a criminal case against her over a 2009 gas deal with Russia.
Ms. Tymoshenko, the current main opposition leader, is already under investigation in two cases for misusing state funds, which she says are part of a political attack against her.
The new accusations of abuse of power relate to a deal in January 2009 struck by Ms. Tymoshenko with Mr. Putin that brought an end to a dispute over gas that saw supplies to Europe briefly cut off.
The agreement linked the price of gas to spot oil prices, leaving Ukraine facing a steadily rising bill.
Ms. Tymoshenko was ousted from power in March 2010 after losing a presidential election to Mr. Yanukovych, a bitter foe. Ms. Tymoshenko has denied all charges against her and claims Mr. Yanukovych is trying to remove her from the political scene.

Email ThisBlogThis!Share to TwitterShare to FacebookShare to Pinterest
Labels: Putin