"Minsk-3" and psychological arsenal of Kremlin 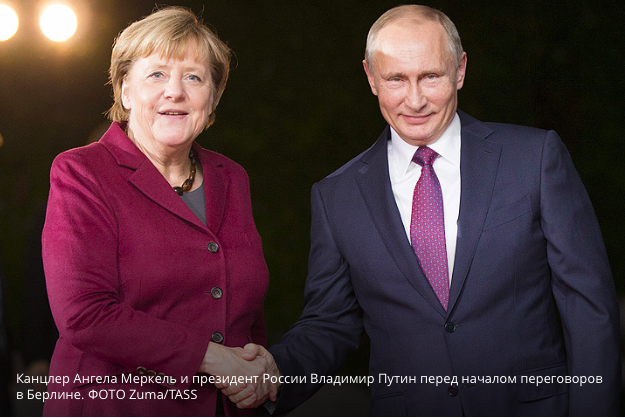 The October talks in the Normandy format in Berlin, which have already was dubbed the Minsk-3, and the events around them showed the Kremlin’s psychological arsenal, which it uses in the fight against the West.

Arsenal is very effective, judging by the results of the negotiations. Putin managed to convince European partners that the elections should be held before the withdrawal of Russian troops and weapons from Ukraine and until Ukrainian control over the border was restored, which, as Putin promised (everyone knows the price of his promises, but they believed him) will be transferred to Ukraine at the second day after the elections.

As the correspondent of Kommersant Kolesnikov reported from the event, having access to the body of, if not Putin, then Surkov, Merkel several times set aside obstinate Poroshenko and, after talking with her, he was agreeing to everything. As the result, Putin managed to put the squeeze on Poroshenko. In exchange, Putin agreed for the introduction of the military mission of OSCE. It seems, Putin intends to expand the mission at the expense of the Russian military, who already control the OSCE Mission of Observers and are seen in the transfer of intelligence information to the Russian occupation army (in its hybrid version).

On the other hand, any decision which Putin agrees for can be blocked by the heads of so-called DNR and LNR, appointed and lead by Moscow but pretending to be independent if Putin doesn't want to implement an agreement. In fact, these pretended republics are Putin's military outposts, whose pretended independence from Russia assures to Putin plausible deniability in case of their military aggression or refusal to accept OSCE military mission.

The same trick for decades Russia uses in Moldova, where totally dependent on Russia Transnistria, when necessary to Moscow, pretends to have a right to take independent decisions. The difference between Transnistria and Donetsk region is the fact that in Transnistria is based Russian Army division, but in so-called DNR and LNR - a hybrid Russian Army known as ChVK Wagner what gives to Putin an additional pretext for plausible deniability in case of accusation on military crimes committed by the Russian military in the region.

It is curious that at the suggestion of Russian propaganda, these hybrid divisions - the GhVK Wagner - are called "separatists".

It was noticeable that Merkel was in a hurry to close the issue with Ukraine, satisfying Putin’s demands in order to move quickly to the issue of Syria. In essence, during the talks, Ukraine will exchange Ukraine for Putin’s promises on Syria, which have long been feared.

Although it is clear that Putin is not going to fulfill the promise. Moreover, the more effectively blackmail works with the resumption of the genocide in Syria, the more willing Putin will resort to it.

Putin managed to soften the claims of Merkel and Hollande to destroy Aleppo civilians (beat Merkel’s trump card) with a simple focus — the day before the Russian propaganda machine launched a misinformation that the Belgian planes allegedly killed civilians.

It is clear to everyone that this is not true, but the human brain is working in such a way that even if at the level of rational level it understands that this is not true, the colorful pictures artificially created by the propaganda put pressure on the emotional sphere and inevitably cause a feeling of guilt.

The emotional sense of guilt, deliberately caused by Putin,  explains the EU’s inability to take action against Russia in Syria. Putin, unlike the West, knows perfectly well that the emotional sphere of the brain influences decision-making much more than the rational one, which is usually occupied with finding a rationale for a decision made on the basis of irrational emotions.

As the result, Putin won a clear victory over European leaders, even without resorting to arms. Unless, of course, of intentional intimidation of Europeans. The act of intimidation causes images in consciousness, comparable by a power of perception to the real act of violence, which determines what decision would be made.
Given the success of the use of psychological weapons, Putin will continue to use it and gain victories if all the psychological tricks he uses are not analyzed in detail and their effects are countered in advance. As for now, nothing dramatic has happened yet, as Minsk-3 is rather an attempt to postpone, but not to resolve the problem.