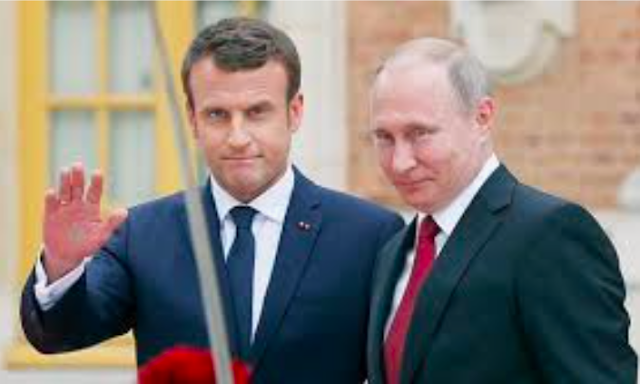 In fact, DNR and LNR were created as false flag operations to cover Russia’s hybrid and direct military aggression and occupation. Thus, by mentioning "separatists" in the official document France and Germany play exactly into Russia’s hands.

Europeans play along with Russia's falsehood


Europeans' blind eye approach lets Moscow continue pretending that there are some apart entities independent in their decision-making from Moscow. In reality, DNR and LNR are Russia's colonial administration entities on the occupied territories.  Styled as an “undiplomatically blunt message” in fact the message is favoring Russia as it depicts the Russian version of reality.  Was this done intentionally, or is this just a sign of incompetence? Whatever the reason, the statement strengthens Russia's distorted "parallel reality" in such a way advancing Russia's position.

If France and Germany want to continue to play the Russian game they will keep receiving sneering replies from Russia's Foreign Ministry spokesperson Maria Zaharova about their “unsubstantiated allegations in anti-Russian mode” as well as propositions to "wait until the end of the investigation" and the most laughable "that the DPR/LPR militants had already expressed willingness to cooperate in an ‘investigation’.

It is clear from the very beginning that so-called DNR and LNR are ruled directly from Moscow and any dissent on the Colonial administration side is punished either by death or exile.  Otherwise to keep the West duped, Moscow continues staging fake elections in the occupied region. Obviously, the staging has nothing in common with real elections and "the winners" are appointed in advance.

Either the Western players will start to name the things by their names or they inevitably will continue being obedient actors in Russia's staged version of reality.

De facto recognition of DNR and LNR as independent players takes off the responsibility from Russia offering to Moscow the noble status of a mediator instead of aggressor. This explains Russian claim to coordinate the movement of OSCE drones with Moscow as Russia wants to maintain the possibility to transport weapons to their hybrid army in DNR and LNR.

Repeating Russian propaganda notions like "separatists" only strengthens Russian position on occupied territory.  Notion "separatists" defies common sense - how can Russian occupying military force be named "separatists"? What is it separated from?

The question is why the West obediently repeats this nonsense?

I wrote many times since the first day of the covert occupation in 2014 that the choice of words for the description of the situation plays a crucial role. Then the occupation was covert, masquerading as an uprising (carefully staged by Russians). Now the occupation is open but the Europeans still pretend that nothing special happens.

There never was any allusion on separatism in Donbas. The notion was artificially created to manipulate the Western decision-makers using the existing stereotypes.  A simple fake notion "separatists" lets Russia for years to delude the West into submission and use their false flags DNR and LNR for the plausible deniability for the crimes committed by the Russian military in the region.

Btw, why did Russia create two entities instead of one? According to Russia's plan which  Moscow plans to implement the federalized Ukraine should have three entities with equal rights. In such a case, two entities DNR and LNR would always overweight the rest of Ukraine as a third entity.

Moreover, the Statement by Germany and France on the recent attack against equipment of the OSCE Special Monitoring Mission in Ukraine,complaining about destroyed  OSCE drone,  mostly ignores the evidence that Russia transports military weaponry to the region under the pretext of humanitarian convoys including deadly surface-to-air missile system, a weapon that can destroy thousands live in minutes.

Obviously, Russia likes so-called "undiplomatically blunt" reaction of the Europeans and will gladly repeat the trick as a red herring diverting attention from the main subject  every time when the Russian military will transport the deadly weapons to the occupied territory

The statement plays exactly into Moscow's hands by diverting attention from Russian preparations for the new military assault on Ukraine.  Fake elections in the occupied region also make part of the getting ready for war. Russia needs legitimization (at least fake) of the occupied territory - so-called DNR and LNR -  as independent states to be able to pretend that they are ruled not by the colonial administration appointed by Moscow, but by a pretended "democratically elected government."

Staged elections will offer to Moscow a green light for the further occupation of Ukraine under the false flag of artificially created would be "popular republics." France and Germany in advance grant to Russia a gift of plausible deniability de facto provoking next Russia's aggression.

Europeans reactions guaranty that France and Germany in any situation will complain again about their precious equipment like drones but ignore Russia's military crimes. As far as it works Russia will use the trick.

However, if the main task for France and Germany is to save intact equipment why bother. Just keep your equipment at home. There is no added value of using it anyway. Quite opposite it diverts attention from the really important thing - escalating Russian military presence in the region.

One more thought. With such attachment to the safety of equipment and ignoring reality as Germany and France demonstrate the idea of the European Army advanced recently bMacron looks even more absurd. Would France and Germany every time issue tearful statement, complaining to the enemy that it destroys their equipment?  In such case isn't better to just give up to aggressor from the start as during WWII did Nazi collaborator General Philippe Petain whom Macron honors as a national hero?

The statement demonstrates that Germany and France did take the course on Russia’s appeasement.  Nothing strnge, that the European Army idea, launched these days under Germany and France leadership, is a long-term Putin's idea designed to destroy Euro-Atlantic Unity and NATO.