Steinmeier Formula: from War of Attrition to War of Annihilation 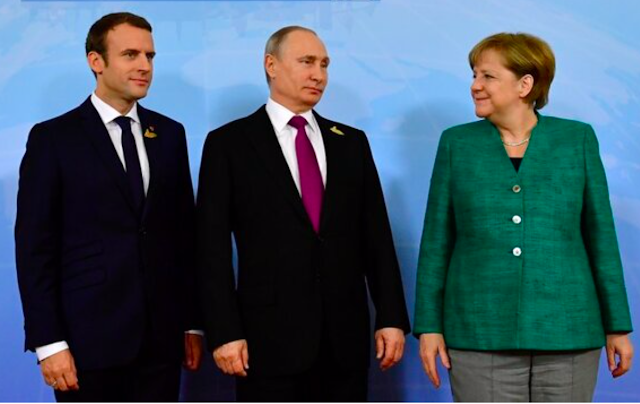 Russia continues its war against Ukraine, concentrates its military forces on the border with Ukraine, massively increases its military presence inside the occupied Donbas, and at the same time demands Ukrainian military disengagement as a precondition for the Normandy Summit of Four. Such a demand is pure nonsense.

What does Zelensky expect from the Normandy Summit of Four - signing a capitulation in the presence of Putin, Merkel, and Macron? It would be suicidal not only for Zelensky and Ukraine but also for Europe as this would lead to a large-scale Syria kind of war in Europe, replacing controllable Russian partial occupation of Ukraine.

Shoigu already promised "to stop Ukrainian extremists" and expressed his regret that "it was not done earlier."

In his view, the extremist is every Ukrainian who doesn't want to rejoin the "Great Russian Empire." What does it mean "to stop extremism" one can see in Syria where Russia either physically destroyed or ousted two-thirds of the population in favor of the fraternal minority sect of the Alawites, which made before the war about 15% of the population.

The Normandy Four Summit is much more dangerous than even the absurd preconditions Russia advances. The Summit is a typical Russian entrapment that Zelensky is either unable to comprehend being a novice in politics or intentionally plays into Russians' hands, blinded by his inner circle with business interest in Russia.

Andrey Yermak - Zelensky's Envoy to the negotiations and his Aide in the Presidential Office, has a long-term Russian business partner close to Putin. Somebody who doesn't want a large-scale war in Europe should stop Zelensky from taking part in this suicidal and nonsensical Summit before it is too late.

Normandy Summit of Four: Rape of One by Three

Why do Merkel and Macron insist on this Summit and thus support Russia's aggression? Both are elected due to Russian help. Merkel rejected Ukraine's membership in NATO, which made her Putin's favorite forever.

At the beginning of the Russian aggression in 2014, Merkel flew to Washington to convince Obama to withdraw military support to Ukraine, which could prevent the war. It was a strong Euro-Atlantic political message to Putin to continue aggression against Ukraine.

Macron needs reelection soon, which explains his enthusiasm for promoting Russia's perverse interests. Europe should not become a hostage to unscrupulous politicians. Macron even bothered to attend the Council of Europe to endorse Russian return, which provoked a demarche of several European countries.

The EU pretends to have a role in Europe - even received a Nobel Prize for Peace, but it has withdrawn from this dangerous situation. The EU should manage the problem, not just the leaders of two European countries with individual and business interests.

Otherwise, the Normandy Summit of Four would mean a rape of One by Three. Ukrainian people will never accept the capitulation to Russia as this would mean a massive war escalation, not peace.