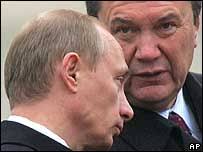 With less than two months in office President, Viktor Yanukovych, has undermined a twenty year-old elite consensus on national security by, as EDM (November 3, 2009) forecast, introducing a far more pro-Russian essence to Ukrainian foreign policy than if Yulia Tymoshenko had been elected (EDM, January 20). Yanukovych –not Tymoshenko– was supported in the elections by Russia (EDM, January 14, 29).
Ukrainian political commentator, Mykola Ryabchuk, warned that the Yanukovych administration would be more authoritarian and pro-Russian than was President Leonid Kuchma in 1994-2004 (www.zgroup.com.ua, April 7). This view of Yanukovych, as a threat to Ukrainian independence and democracy, is quickly gaining ground due to the heavy handed manner in which he has launched his divisive domestic and foreign policies despite being elected by only one third of the population, coming first in 10 out of 27 administrative regions and with less than 50 percent of the vote.
The West has largely remained passive about President Viktor Yanukovych’s infringement of the constitution and turn towards Russia, because it has accepted his claim that he is bringing much needed “stability” to Ukraine after five years of “Orange” instability.

This is a misnomer as the signing of the Black Sea Fleet (BSF) base extension by 25 years crossed a “red line” and will push Ukraine closer to the Kyrgyz scenario. The 2004 Orange Revolution was the largest of the democratic revolutions, the longest and most peaceful. Future protests will be less likely to be as peaceful.
Until Wednesday, the opposition was divided over how to respond to the roll-back of democracy in Ukraine. Since April 22 a nationalist component to opposition grievances has united former moderate and radical “Orange” forces for the first time since the 2004 elections.
The Ukrainian opposition has been unanimous across the spectrum in denouncing the BSF agreement as “state treason,” describing Yanukovych, not as a president, but a “Little Russian governor” or, as former President, Viktor Yushchenko, put it derogatorily, a “Russian lad” (www.razom.org.ua, April 22; www.grytsenko.com.ua, www.svoboda.org.ua, April 21; www.nru.org.ua, April 20).
Tymoshenko said: “This is not simply treason, this is the beginning of the systematic ruining of the independence of our state” (see video of her press conference:www.tymoshenko.ua/uk/article/a8wz4v6v). The moderate former presidential candidate, Arseniy Yatseniuk, condemned the sale of Ukrainian assets, calling it “unconstitutional” and denouncing the sidelining of parliament in the formulation of foreign policy (see the video of his press conference: http://frontzmin.org, April 21).
In an earlier open letter to President Yanukovych, former President, Leonid Kravchuk, who supported Tymoshenko in the 2010 elections, complained: “In our words we are moving to Europe. But interestingly, we are doing this through Russia, through the Single Economic Space, and the Customs Union. It is obvious that this is impossible” (Ukrayinska Pravda, April 6; www.zik.com.ua, April 8).
The opposition is planning street protests on April 24-25 outside parliament, the day when the Russian State Duma and Ukrainian parliaments plan to synchronize their ratifications. Inside parliament, on April 27, there might be violence as the opposition is planning to blockade the speaker’s podium.
A major problem facing Western governments and international organizations is their willingness to accept at face value Yanukovych’s claims to be supportive of democracy and Ukraine’s integration into the EU. This is a major mistake as Yanukovych will, as the BSF accords show, not revive Kuchma’s balanced multi-vector foreign policy. The 1997 BSF accord signed by Kuchma was for a temporary 20-year lease for the base.
Four examples show how the West needs to ignore empty declarations and instead focus on Yanukovych’s actions. Firstly, he declares goals without establishing mechanisms to achieve them. The mindset is similar to Soviet aims of building communism or fulfilling five year plans are similar to current programs to combat corruption or join the EU.
Secondly, he undertakes two policies at the same time that contradict one another. This has a long record. The 2002-2004 Yanukovych government sent the third largest military contingent to Iraq and yet launched the biggest anti-American campaign since the Soviet era during the 2004 elections. Yanukovych’s 2010 election program supported Ukraine’s “non-bloc status” and since his election has agreed to transform Sevastopol into a permanent BSF base. Yanukovych fails to see the contradiction between a country having non-bloc status and a foreign base.
Thirdly, his policy goals may not reflect serious intentions, but merely declarations of intent as contracts are meaningless in a country such as Ukraine without the rule of law. Meanwhile, politicians are never held accountable for their actions and statements.
Prime Minister, Yanukovych, could support NATO membership in 2002-2004, but oppose it since 2005 without explaining why. While abandoning the goal of NATO membership, Foreign Minister, Kostyantyn Hryschenko, said that, “Ukraine is interested in the further development of partnership and pragmatic cooperation with NATO” (Kyiv Post, April 8). This cannot be taken at face value, as disruptions of joint Partnership for Peace (PfP) maneuvers began, after a decade of high levels of PfP-Ukraine activities, in 2005 at the instigation of the Party of Regions, Crimean and Odessa Russian nationalists and Federal Security Service (FSB) officers in the BSF (EDM, July 14, 2009). The Party of Regions repeatedly voted against permitting foreign troops to enter Ukraine, thereby preventing annual PfP maneuvers, and against NATO’s lease of Ukrainian transport aircraft.
Finally, contradictions will exist between authoritarian, Eurasian-style domestic and declared democratic, pro-European foreign policies. Yanukovych’s continued official support for EU membership over unions within the CIS is meaningless. Kuchma was not seen as a threat to Ukrainian democracy until his second term in office, while concerns about Yanukovych as a threat to Ukraine’s democracy have already been raised after him being in power for less than two months.
Based on the steps that he has taken since his inauguration, a Yanukovych presidency may take the country further away from EU membership, not closer. Yanukovych’s declared foreign policy goals cannot be taken at face value. Brussels, (where Yanukovych first visited) and Washington (visited earlier this month), would do well to appreciate the existence of these different Western and post-Soviet mindsets. Any failure to do so will lead to inevitable future disappointments.
--Taras Kuzio