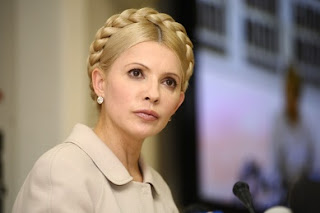 EUOBSERVER / BRUSSELS - European officials have condemned the detention of Ukraine's former prime minister Yulia Tymoshenko - a move set to complicate EU-Ukrainian relations ahead of a key summit in December.
The Kiev court ordered the 50-year old Tymoshenko to be put behind bars for the rest of the trial after she "systematically" flouted rules by refusing to stand up and by calling witnesses names.

Prosecutors opened a criminal case against her in April, alleging that in 2009 she abused her powers by forcing state energy company Naftogaz to sign a pricy gas supply contract with Russia's Gazprom. If convicted, she could spend up to 10 years in prison.
Tymoshenko and her allies say the charges are politically motivated and designed to stop her from running in elections next year.
One scenario could see her get a suspended sentence. The verdict would block her from holding any public office but would likely result in less fierce EU and US criticism than if she ended up in jail.
EU foreign policy chief Catherine Ashton said in a statement on Friday (5 August) the bloc is "extremely concerned."
"The EU and other international partners of Ukraine have repeatedly underlined the need for fair, transparent and independent legal processes to avoid any perception of a policy of selective justice. Today's events are therefore a cause for concern about the state of the rule of law in Ukraine."
European Parliament chief Jerzy Buzek noted: "The context and conditions raise concern about the politically motivated nature of this decision, and about the application of the rule of law in Ukraine."
The chief of the European People's Party (EPP), the family of centre right political parties in the EU, Wilfried Martens, said: "I call on [Ukrainian President] Viktor Yanukovych to put an immediate end to this sham – Europe's patience has reached its limit." Tymoshenko's party is affiliated with the EPP.
Centre-right Swedish foreign minister Carl Bildt also reacted on his Twitter page on Friday, saying that the trial is "an embarrassing spectacle" and "does great damage to a great country." The French foreign ministry said it is "strongly concerned."
Images of Tymoshenko in handcuffs could spoil the atmosphere ahead of an important EU-Ukraine summit in December.
Both sides are hoping to initial a political Association Agreement and a Deep and Comprehensive Free Trade Agreement at the event in what Ukraine's EU ambassador recently described as a "geopolitical shift" in Europe, putting the former Soviet province on a long-term road to EU accession.
Yanukovych, a former Soviet apparatchik, was Moscow's preferred candidate in presidential elections in 2004.
He won the vote but was ousted from office after massive street protests - the Orange Revolution - swept into power a pro-Western coalition co-led by Tymoshenko. The original election was later declared a fraud.
Yanukovych returned to office last year after infighting in the orange group exasperated voters and EU allies alike. In the past 12 months he has made moves to appease Russia - notably by allowing its Black Sea fleet to stay in a Ukrainian port in return for cheaper gas - but he has also pushed through pro-EU reforms, paving the way for the December pact.
Grigory Nemyria, Tymoshenko's former foreign minister, told this website that her detention will damage Ukraine's European aspirations.
"Today Ukraine has shown not its European, but an ugly, authoritarian face. How can the EU deal with a country ignoring basic human rights? The situation here is not much different than in Belarus: we had 300 special forces deployed in the courtyard," he said.
He added that the government is "clearly testing" to see what the EU response will be and called for a "strong and uniform" reaction from member states.
"I don't know how many tests you need to realise it's a game they are playing," the former minister said.
In an interview with the New York Times earlier this week, Tymoshenko said she is "ready for anything", including spending years in jail.
"I am ready to fight, and for the consequences of fighting," she said. "In this fight, I see a very important goal. I see the defence of Ukraine. And I am relying on the support of that part of society that sees Ukraine as a successful, competitive and independent European country."