Russia and China - Partnership of "Rabbit and Boa" 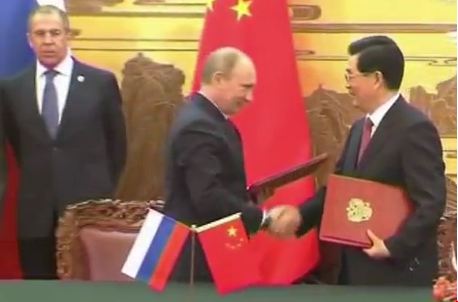 Putin's three-day visit to China after his demonstrative refusal to participate in the Summit of the developed countries in the United States means that he does have something to discuss with the Chinese leadership.

Moreover, this is an opportunity to demonstrate to the West that Putin has an alternative to it. There is no doubt that he feels more comfortable in China where nobody reminds him on human rights and democracy, what Putin dubbs as unnecessary "ideologization" in relations with the West.

Russia and China signed a dozen of papers during Putin's visit. But it is unlikely to rely on any breakthrough or making public the agreements. In the energy sector, China is willing to offer for Russian gas only half of the price the EU countries pay to Russia.  China's proposition to invest in the development of the Far East includes a precondition that foresees employment only of Chinese, who should be greeted the freedom of movement to Russia.

It is unlikely that Beijing had suddenly softened its terms at a time when the third comeback of Putin as the president of Russia caused a visible disappointment in the West and led to a visible cooling between the West and Russia. Moreover, their relations have reached a new historic low. The opposite is true. China, carefully following the developments, only increases its requirements in line with Russia's growing isolation.

Previously, Putin has repeatedly complained that unlike the Western negotiators practicing a win-win approach, the Chinese negotiators are extremely tough and are not inclined to take into account the interests of the opposite side and od capitalize on any weakness.

Therefore, Putin, known to demonstrate his chutzpah in dealing with the predictable and conciliatory West, in China has to keep mom, smile, and bow in response to the tough Chinese approach.

Expressing the feeling of being threatened by West Russia is bluffing. But Russia does is afraid of the Chinese, whose toughness, unpredictability and stratagem-like approach for centuries were cultivated as a military and state value.

"Creeping Takeover" as prospect of partnership

Despite some delusions, Russia is not anymore China's communist "big brother." It is neither a source of a 'scientific and technological progress' nor a successful economic model.

For China, Russia is a neighboring country, whose natural resources are enough for another couple of decades, given the appetite of the Chinese industry. Russia possesses vast vacant territories at the Far East which China views as its potential lands.

From the political point of view, Russia is a convenient tool to fight "the dictate of the West" while remaining aside and benefiting from Russian attacks destroying the ideological strength of the west.

Moscow should realize that confrontation with the West and deepening the partnership with China on Beijing terms means for Russia a "creeping takeover" by the disciplined and well-organized Chinese. There is no need even for special arrangements - Russia's corruption and lack of control over the territory are enough for de facto annexing vast territories.

Beijing's tough reaction to the closure of the Cherkizovsky Market in Moscow, where about 60 thousand Chinese were employed, made clear to the Kremlin that it is no longer in control of the situation even in Moscow, not to mention the Far East, where the Chinese presence is much more significant.

Moscow had to give in to the Beijing pressure and offer to the Chinese traders the best commercial platforms in Moscow in exchange for the Cherkizovsky market closure, undertaken to combat the massive smuggling by the Chinese and their overwhelming position on the market.

All this can hardly signify a "thaw in relations between the two giants," as reported on Russia's visit to China by the Western media. The Shanghai Cooperation Organization, whose Summit took place these days, only intensified the competition between Russia and China for influence over the former Soviet republics in the Central Asia, which the Kremlin regards as its fiefdom.

Moscow's threats to withdraw from the U.S. Dollar and move to the contracts with China in the local currencies, in practice, mean Russia's turn from U.S. Dollar to the Chinese Yuan, further weakening Russia and strengthening China by making the Yuan a regional currency.

Until now, Russia abstained from the Chinese investment proposals. However, when not only relations with the West does not add up, but the oil prices are falling, it is likely that Putin will give up to the Chinese conditions.

This would allow to strengthen Putin's regime inside the country and continue increasing his covert influence in the West, reflected in the destabilization of Western democracies, corrupting the media and the change of elites for loyal politicians, willing to weaken the West.

The West has noticed the "Putinization" of Hungary and Ukraine as copying of Putin's rule model by the countries' authorities. However, the West does not see rapidly gaining strength Putinization of the West itself, where the West is a passive object of Putin's manipulations and modifications. The process is persistently ignored by the West because of the peculiarities of the Western political culture.

In particular, in the West, it is considered bad manners to discuss what is known as the "hidden agendas" and what consists the essence of the foreign policy of the former KGB agent turned president of Russia Vladimir Putin. As damaging for reputation, the topic is ignored.

Therefore, 'Putinizaton' of the West is carried in a covert way in accordance with Russia's "fait accompli" approach in politics: the process is covert until the moment when the critical mass of change has achieved the point of no return. In particular, this explains Putin's reluctance to visit the U.S., where the process of "creeping Putinization" is particularly active.

Bringing to power the passionate fringe politicians, loyal to Putin, whose support converts them to the political mainstream, takes Putinisation from the covert phase into the open.

Greece is an example of the transition from a 'creeping Putinisation" into the open one. Emerged out of nowhere after a continued destabilization in Greece, radical left SYRIZA ranked second in the May elections and promises to lead in the June reelections, threatening with further political and economic upheaval in Europe. The leader of the SYRIZA Alexis Tsipras' vows to cancel the Greece agreement with the EU and the IMF, which is the basis of Russian foreign policy, actively promoted not only in Greece but also in other countries.

Bringing into the power loyal political outsiders in the most influential Western countries would lead to the situation when anybody would challenge Putin on human rights or call to democracy in Russia or China. In essence, this is the "new geopolitical reality', coming of which the leaders of Russia and China announced after the first day of talks in Beijing.

Syria as a symbol of Russia and China "leadership"

Undermining the West, which could contribute to a real political and economic modernization of Russia and strengthen its sovereignty, Putin, in fact, serves the interests of China, sacrificing Russia and the Russians to the potential dominance of the huge neighbor.

However, the problem is that China is far from being able to provide world leadership - a burden, which now is carrying the USA. Leadership involves more than just the Chinese ability to generate economic growth, which is also based on Western investments and Western consumption.

A clear result of the Russian-Chinese "leadership" today is the situation in Syria, which offers a preview of its potential for the future. Putin's partnership with Beijing, based on the anti-Western ideology, leads to a chaos of a global scale, the first victim of which, ironically, will be Russia itself. The Law of the Jungle as a practical expression of the Russian "Sovereignty Ideology," replacing the international order led by the Western democracies, won't protect Russia from a stronger neighbor.