Putin's use of chemical weapons in hybrid war against Ukraine 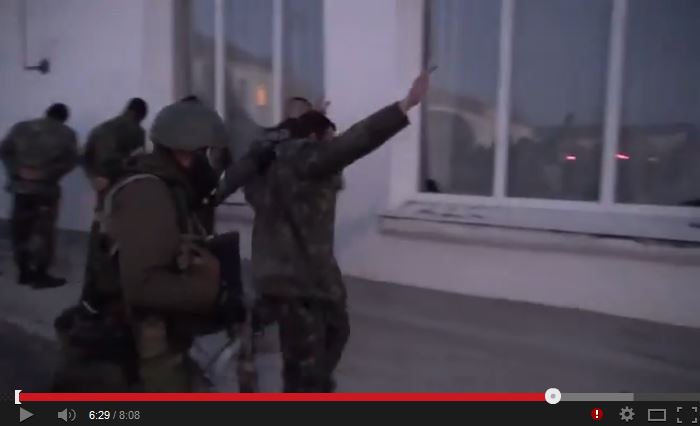 There is a lot of fuss in media about the "new military prowess" of Russia and Russian “polite people”, succeeded in the silent and bloodless occupation of the Crimea. There are a lot of explanations how Putin managed to do ranging from Russian fear-mongering TV propaganda, inducing local population into psychoses, Putin's usual bribing of local authorities to cutting communications with Kyiv and psychological unpreparedness of the Ukrainian military to kill the Russians.  All of them make sense. But there is one more Putin's "secret weapon", which was not noticed. 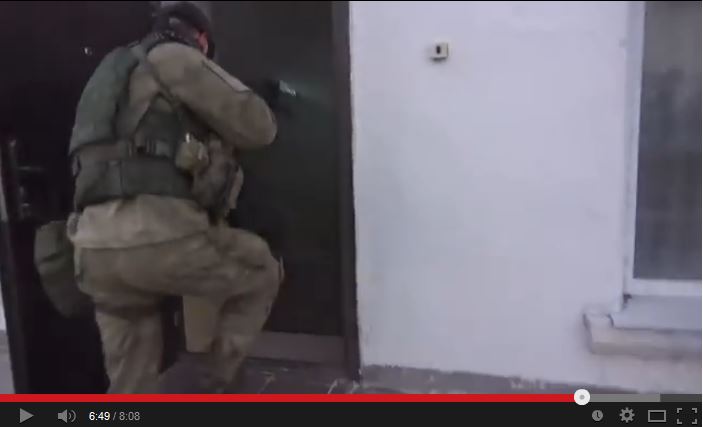 Epic Russian video report  (produced to celebrate Russia's new military prowess)  demonstrates there is a reason to consider that the Russian special forces have used the non-lethal chemical weapons while seizing administrative buildings and Ukrainian military bases,  banned in warfare under an international treaty on chemical weapons.

The video shows that while capturing Ukrainian soldiers in their military barracks some of the Russian gunmen were wearing respirators. What for?  How to explain the Ukrainian military passivity used for Russian propaganda purpose? The video also shows that approaching the building the Russian gunmen brought inside some heavy equipment. What kind of equipment this could be?

The passiveness of Ukrainian Crimea garrisons should shape the public opinion from the very beginning of the Russian intervention as a prove of Ukraine not opposing to the invasion of Crimea. This supported Russia's propagandist mantra about "righting a historical wrong" meant to stifle the criticism of the West.

Another video from the surveillance cameras at the Council of Ministers building shows that before the capturing of the building the chemical substance was infused inside. The people in the video are absolutely passive without any sign of neither shock nor fear - just apathy. 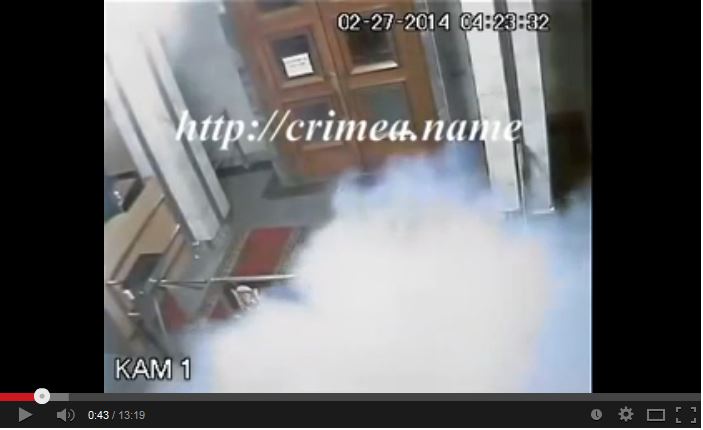 In such case is this a sign of prowess or just a use of forbidden chemical substance for stealthy incapacitating security officers and military from performing their duties?

Russia's use of non-lethal chemical weapon

Putin has a record  of use of chemical weapons during the Moscow theater hostage crisis in the  Dubrovka Theater on 28 October 2002 when a potent chemical substance was infused into the ventilation system before Russian Spetsnaz stormed the theater.  It was designed as a non-lethal chemical attack, but when the troops burst into the hall, they found the hostages and hostage-takers in a state of coma.

Last year Russia was accused of supporting its Syrian ally Bashar Al-Assad using chemical weapons for the mass killings of the Syrian population. To prevent damage to his reputation  Putin managed to convince Al-Assad to scrap the chemical weapons what rescued the dictator from the US attack.

At the beginning of April, an Israeli security source confirmed that the Assad regime had used a non-lethal chemical weapon at the end of March on the outskirts of Damascus. The source said he could confirm claims made by Syrian rebels and doctors last month that a substance had been used on rebel fighters in Harasta, an outlying region of the Syrian capital, adding that the chemical “neutralizes [threats] but does not kill.”

Such synchronization of the chemical weapons use by Al-Assad and Putin is quite remarkable.  However, there is another remarkable coincidence - at the same days,  Russia suddenly banned military and police from traveling abroad. What is the secret that Putin wants to hide?

The ban includes employees who have access to state secrets - parts of the military and the police, the Federal Drug Control Agency, the Federal Migration Service, Federal Penalty Service and certain employees of the Foreign Ministry. According to estimates, they are around 250 000 people.

The goal of the measure, according to LifeNews.ru is to prevent leaks of secret information to foreign intelligence agencies who could use it to penetrate Russia. The duration of the ban is yet unclear, which for the time being is for an indefinite period.

This could mean that Putin takes extraordinary measures to keep in secret the use of chemical weapons.  Especially so after Putin's unexpected revelation at his press-conference at 17th of April that the silent  “polite people”, who seized Crimea without a shot, in fact, were Russian special forces.

This means that the same chemical weapons are used in the East of Ukraine – in Donetsk and other places, where the same Russian Spetznaz has seized and continues seizing the administrative buildings in the same “silent and polite” manner.

This is not the only use of psycho-chemicals in Putin's “hybrid warfare” against Ukraine. There is an information that inside Donetsk state administration building there is a laboratory, where some special drug is produced for managing the rebels – many of whom are either criminals or drug addicts.

A similar substance, known as a “power drug”, which reduces fatigue, heightens aggression and diminishes human empathy” was used by Nazi troops. "The idea was to turn ordinary soldiers, sailors, and airmen into automaton^s capable of superhuman performance."

It seems Putin decided to actualize Hitler's secret weapon. It is not surprising that Khodorkovsky, visiting recently Ukraine, was not allowed to enter the Donetsk state administration building.  As one of higher ups of the rebels informed him: “There are patriots there and they are capable of anything”. 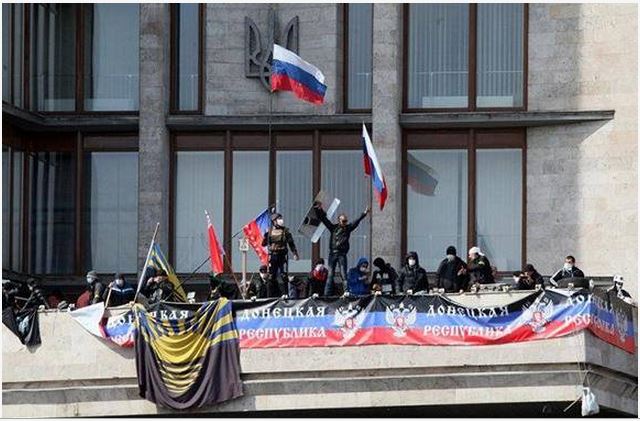 In February, there was news on the Russian Spetsnaz, which lived in a resort near Kiev during the Maidan. They were getting some special tea from their higher ups, not from the resort as the servicemen of the resort mentioned. Some observers consider that this was the same unit of Spetznaz, who killed Maidan activists later in February.

Every result achieved in a war should be consolidated in diplomatic agreements. This is just another battlefield in Putin's hybrid war. One could notice that Sergey Lavrov does whatever he can to prolong the talks.  And it seems at the end of the talks he is not exhausted like other participants, but an opposite – he looks even more refreshed than at the beginning. Journalists noticed that Lavrov often leaves the negotiations room­  for smoke so often that some journalists even suggested it is damaging for the superpower status, for wh­ich Russia aspires. Of course, this could be just a sign of agitation. Otherwise, nobody knows what exactly Lavrov smokes and what supplies him with his super-powers letting him always obtain what he wants, leaving the opponents weary and confused.

It is not excluded that Lavrov uses a kind of drug as well. Not only German soldiers but Hitler and all highest-ranking military officers in the Third Reich used pervitin to increase resilience and mental abilities.  Moscow pays huge attention to developing super-human abilities to obtain an advantage on different stages and levels of warfare which Russia leads against the West.

The wearing-out strategy itself is enough to successfully take advantage of exhausted partners during the talks. But after the latest diplomatic victories, it seems that Lavrov could use not only a doping drug for himself but a kind of incapacitants for his partners, what makes them more vulnerable to manipulation  New nano-technologies in which Russian state invests abundantly, make just one capsule in his pocket enough to achieve this result. The challenge here is to not overdo with the final results of the talks to remain credible.

The same methods can be used against political opponents inside Russia and abroad using ramified networks of FSB.

Putin himself is famous for using some special effects during his negotiations with Angela Merkel exploiting her fear of dogs and paralyzing her will power by the presence in the negotiations room of his huge dog. This means that he doesn't have any psychological barrier for exploiting such approaches in other circumstances too and at the much larger stage. Moreover, this approach makes part of his basic skills learned as KGB agent. And Putin never tried to downplay his FSB background.

As psycho-chemicals break a resistance and make people vulnerable to manipulation they can be used against the border patrols to access any administration building or even a country if special security measures won't be taken. And this is not only about Ukraine. Ukraine is just a first in line.

This hybrid war has advanced new challenges, which Ukraine and the West should acknowledge and face. The new chemical weapons also demonstrate how far Putin is prepared to go to achieve his goals.