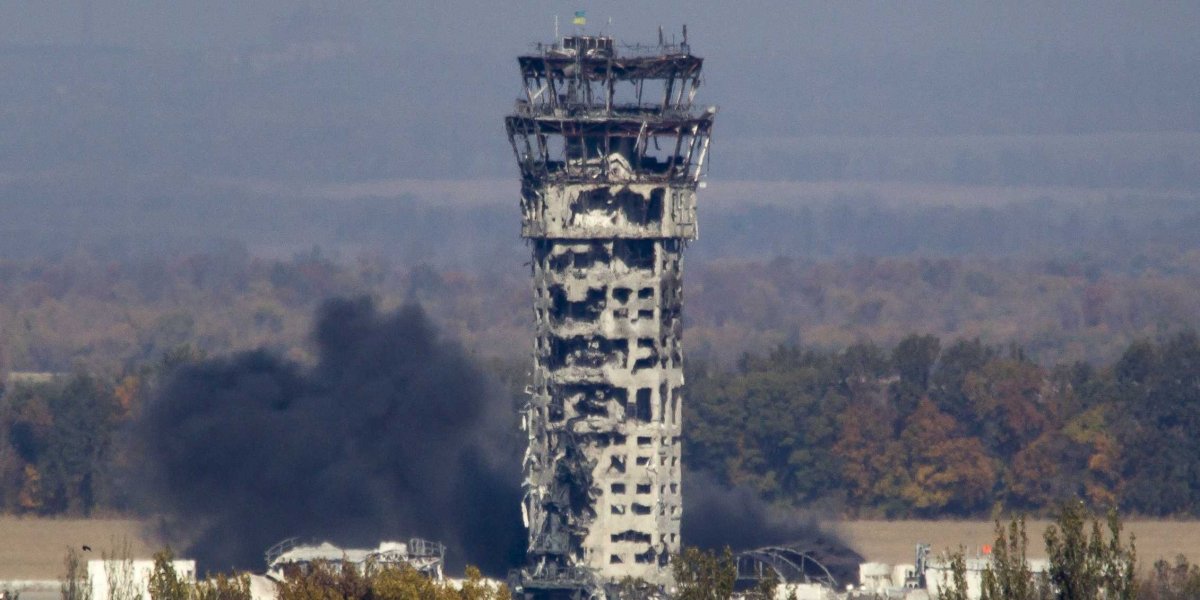 The attacks against the Donetsk airport, which became the symbol of Ukraine’s resistance to Russia’s intervention, don't stop for several months. As the defenders of the airport witness, periodically alongside the Russian heavy weapons assaults some groups of strangely dressed and apparently drugged people attack the airport in a way as "if they were immortal."

Russia uses locals for capturing the airport. At the same time this is a convenient way of cleansing the occupied territory from those ireliable known as “pro-Russian separatists”,  posing a problem for Moscow. Local ‘separatists” started realizing that ­­they were blinded by Russian propaganda  and began going out of control, transforming from Moscow’s  “useful idiots” to a potential threat. Civic dissidents to new regime also are forcibly conscripted to the “separatists” army, controlled by the Russian Special Forces and sacrificed during the attacks.

The passports of sacrificed locals are available to use in upcoming local elections, guaranteeing to Moscow the "right choice". Their documents can legitimize the Russian Special Forces' presence in the region, who assure the management of the occupied territory accordingly to instructions from Moscow. The pretended "heads" of the Donetsk and Lugansk  "people's republics” in fact are just "talking heads", allowed to articulate the decisions, made by the Kremlin.

Russian Special Forces occupy apartments and houses both of the “dead souls” and of the refugees fled to Russia scared by Russian propaganda. Invented by Russians “Ukrainian fascists” became the main "virtual weapon" of Moscow's hybrid war. Russian Migration Service provides Special forces with the necessary information obtained from the passport confiscated in Russia from refugees. The refugees are then sent without documents to the Russian Far East. Thus Moscow resolves another problem - dilutes local ethnic population with Ukrainian refugies.

In essence, the Kremlin performs massive replacement of the local male population of the occupied region with the mercenaries from the different Russian regions, including Chechnya and other unreliable ethnic republics in such way defusing their separatist potential. The videos from the occupied zone show that the volleys of heavy weapons directed to Donetsk airport are ordered with the exclamations "Allah Akbar!"

Moscow uses a centralized scheme of colonial rule over the occupied regions providing full control of the region. This allows Russian Special Forcesunder the guise of "Ukrainian  separatists' to continue destroying the region and terrorizing the local population into obedience.

Putin does not want to annex these territories or recognize their independence. In case of recognition or annexation, Putin should pay for reconstruction of the intentionally destroyed region. That would be devastating for Russian economy and would lead to defeat.

Putin’s strategy intends destruction of Ukraine by permanent devastation of the controlled region. Under the guise of "humanitarian convoys”, Russian continues saturating the region with the heavy armament. The same “humanitarian convoys” return to Russia with the equipment of the strategic Ukrainian enterprises, leaving the population of the occupied Ukrainian territories without means of living.

Putin seeks from Poroshenko a de facto recognition of Russia's control over the occupied territories, turning them into a de facto Russian military base, while maintaining visibility of Ukraine’s sovereignty over the territory.

Thus Kremlin would ensure the centralized management of the region while all the costs for infrastructure rehabilitation and maintenance of viability of the region are imposed on Ukraine. In this way, Russia plans to continue its war of attrition against both Ukraine and the West, which promised helping Ukraine with reconstruction of devastated region.

By crea­­­­­ting a terrorist enclave on the enemy’s territory Putin can maintain permanent "nonlinear war" against Ukraine by creating chaos throughout the country, and at the same time demand from the international community recognition of his “peacekeeping role" in resolving the "Ukrainian crisis" and consequent lifting of the sanctions.

The artificially created terrorist enclave can be used as a springboard for Russia’s new territorial conquests.

In asymmetric warfare, the main bulk of military force is used mostly for demonstrative assaults. The purpose of the assaults are  to intimidate and coerce the enemy into making concessions that are needed by Putin. However, this does not mean that at some point the asymmetrical war is not replaced with a traditional war. The announcement made in early October on withdrawal of the troops, which the Russian propaganda presented as Russia's desire for peace, was just a tactical move.

Wedging war during the winter is more expensive on the one hand. On the other hand, Putin hopes during the winter to get rid off the Western sanctions. He also intends to create "Ukraine fatigue" in the West by provoking the chaos in Ukraine, orchestrated by the Russian Special forces.

If Russia’s new colonial scheme is successful in Ukraine, the same schemes can be implemented in other places. In fact, this operation illustrates the basic principle of the Russian asymmetric war – obtaining high results at the lowest cost by using enemy’s resources in its favor.

Putin believes that the strategy and tactics of the low-cost asymmetrical war should let him gradually take control not only over Ukraine, but also over the countries of the European Union what finally should destroy it. In Putin's view the EU is the main enemy of his “Eurasian empire from Lisbon to Vladivostok” project. Anti-American rhetoric is meant to divide the EU from the US and in such way deprive Europe of military protection.

Thus, announced earlier in October withdrawal of the Russian troops from Ukraine, presented by Russian propaganda as Moscow's desire for peace, is just a tactical move. Winter war is more expensive. Until the spring Putin hopes getting rid of the western sanctions and to cause Ukraine fatigue due to chaos, intentionally caused by the Russian Special forces.

According to Russian estimates, the West should realize that the restoration of occupied territory is impossible because of constant terrorist attacks and Ukraine is doomed to a deep crisis because of the separatists "black hole" on the occupied territory. The next step should be the West rejecting Ukraine in favor of Russian control over it.

Legitimization of the occupied by Russia territory as a separate entity should trigger the process of re-Balkanization of Europe - the process in which Russia is actively involved. For long time Russia has supported financially and ideologically the separatist parties inside the EU, thus building focal points for future destabilization. After achieving the stage of chaos  Russia plans to start building from remains its own version of Europe instead of the EU.

An alternative to the Russian creeping colonization is recognition of Russia’s responsibility for the temporarily occupied Ukrainian territory and creation of powerful defense line between Russia (including the temporarily occupied territories) and Ukraine itself, what should lead to isolation and reverse of Russian aggression in Ukraine as described in my previous article.

To achieve control over occupied territories Putin counts on the Western stereotypical perception of the war as an internal "Ukrainian conflict." Russian propaganda regularly imposes this formula either by Russian controlled news channels or under the guise of analytical articles of the Western experts, whose only input often is stylistic editing and signing the Kremlin written articles. Abundantly funded and geting more sophisticated by day, Russian propaganda works hard to impose on the West Putin’s decisions, damaging the West and benefiting Russia.

In Putin’s opinion, the West is especially vulnerable in spontaneous decision-making. This regularly occurs when Russian suggestive propaganda is combined with the physical intimidation such as regular infraction of EU country’s space by Russian military planes, submarines or declarations on potential nuclear arms use.

Exploiting Western uncritical and stereotypical thinking first allows Russia to capture new territories by subversive means and then to call the West for "diplomatic solution", "peaceful settlement", “dialog” and "new reset" – all the “magical words”, evoking involuntary approval of the West.

For the Western politicians these words are not an empty sound, but the basis of coexistence in the world.  Thus, using the conditioned reflexes of the Western leaders Putin gets a convenient perpetual scheme for legitimizing of new territorial seizures, which he can apply elsewhere, including in Europe.

If the Western leaders do not want to play along with the Putin's scheme for building a Eurasian empire from Lisbon to Vladivostok – they should learn to consciously understand Putin’s “magic formulas”. These formulas must not be automatically accepted in hope for peace, stability and high political ratings. The result would be the opposite - spreading of unfettered “Eurasian fascism” over the continent.

The conscious reaction is a reply, based on principles and values that constitute a real soft power, against which Putin's 'soft force' is powerless. To combat Putin's "soft force" the West must learn to think out of the box and to get rid of prevailing stereotypes. The result of the psychological warfare, which Putin leads against the West depends on this.

Russian occupation of Ukraine would have been impossible without indoctrination of population in both Russia and Eastern Ukraine. This is the main element of Russian asymmetrical war, which makes peoples of the attacked countries fight in Russia's favor against their own countries and their own interests.

Russia wages the asymmetric war not only against Ukraine but also against the West. It has started several years before the occupation of Ukraine. This explains Putin’s confidence on obtaining full support of the West. The war against the West presumes gradual seizing control over the Western media, expert and public opinion, supporting of the dead-end anti-European parties and protest movements to the total control of the country.

The easy targets for Russian control usually are state-financed media organizations, especially those including  Russian-language services, making them vulnerable to Moscow’s influence. Among them, there are Euronews – the most popular news channel in Europe, BBC, DW, and other public broadcasters. Putin also expands West Russia’s propaganda channel RT (Russia Today) and other less obvious instruments.

By controlling Western public and expert opinion, Putin obtains control over the political situation in the European countries. He intentionally creates unfair competition between acting moderate politicians who resist his aggression. This is accomplished by Putin support of the ultra-left and ultra-right who are united by their hatred of the EU.

Control over the public opinion allows deepening contradictions, triggering conflicts, shaping its "fifth column", which he can use at a right moment at his own discretion.

Of course, Russia is using many other technologies and active measures to create on the enemy’s territory a loyal to Russia underground. However, the news channels are crucial for creating generally “correct” mental background, carefully constructed in the Kremlin psychological laboratories.

The situation is critical. If the West does not take measures necessary to protect its own citizens from the Russian indoctrination, a little sooner or later Putin will bring to power in the EU countries left and right fringe, which, despite the ideological contradictions, merges in supporting authoritarian view of the world and willingness to submit to Russia’s influence. The occupied Donbas, where all these technologies have been applied, shows what the result they can produce in practice.