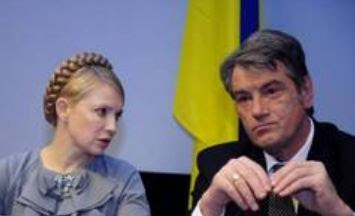 Yulia Tymoshenko and Viktor Yushchenko in 2007 (Source: AFP)
Former President Viktor Yushchenko is an important, but underestimated, aspect of the sentencing of opposition leader Yulia Tymoshenko to seven years imprisonment and a three year ban from government work. Our Ukraine Honorary Chairman Yushchenko’s support for the sentence was in contradiction with the Our Ukraine political party, which condemned it as a return to authoritarianism. Every other opposition political party condemned the sentence.
Party of Regions deputy Taras Chornovil said in a recent interview with Radio Svoboda that “Yushchenko was the only well-known public person in Ukraine who supported the sentence.” Yushchenko was the only person who “applauded and said that he supported it and was satisfied with it” (Radio Svoboda, October 17).

In interviews given to the BBC Ukrainian service on October 12 and Der Spiegel on October 18, Yushchenko publicly supported Tymoshenko’s sentence. Speaking on Inter television channel on October 23, Yushchenko stated his opposition to the decriminalization of the 1962 Soviet criminal articles that were included in the 2001 Ukrainian criminal code used to sentence Tymoshenko. Officials, he argued, should be held responsible for their actions. The EU had sought to use decriminalization as a compromise for Yanukovych to release Tymoshenko.

Former US Ambassadors to Ukraine, William Taylor and Steven Pifer, described the trial as a “farce” (Interfax-Ukraine, August 29; Kyiv Post, July 28, September 20). Yushchenko, in contrast, said it was a “rather a normal judicial process,” believing the charges arose from her “treason.” Yushchenko continued, “I do not see a show trial, but rather a normal judicial process. Even politicians are not above the law. Was not the former French President Jacques Chirac also forced to stand trial?” he asked.

Former Kyiv Mayor, Oleksandr Omelchenko, elected to parliament in the pro-Yushchenko Our Ukraine-Peoples Self Defense, believes that Yushchenko’s support for the sentence is a product of his personality as he showed himself to be a “very low moral person” who “betrayed tens of millions of people.” Omelchenko and other “Orange” politicians have pointed to Yushchenko continuing to live in the president’s dacha as a “reward” for his anti-Tymoshenko vendetta. Yanukovych lives in his palatial Mezhirya, a former Soviet complex illegally privatized when he was prime minister in 2006-2007, and does not need the president’s official residence. A Razumkov Center opinion poll conducted one week after the sentence confirmed Omelchenko’s views, finding Yushchenko to have the highest negative rating of any Ukrainian politician. Indeed, 80 percent of Ukrainians did not support his actions, higher than the Communist Party leader Petro Symonenko who had minus 69 percent ratings. Only 1.5 percent of Ukrainians supported Yushchenko (Interfax-Ukraine, October 18).

Party of Regions deputies have pointed out that the criminal investigation against Tymoshenko was launched in 2008-2009 by President Yushchenko and they have merely brought the case to its logical conclusion. The Tymoshenko case has had three stages. The first stage in the summer of 2008 was the collection of a dossier of Tymoshenko’s alleged “treason” by the presidential secretariat (Yushchenko has continued to use her “treason” to justify his support for the sentence). The “research” operation was led by then Chief of Staff, Viktor Baloga, who resigned in May 2009 after which he defected to Yanukovych. During the 2010 presidential elections Baloga organized victory for Yanukovych in Trans-Carpathia, the only western Ukrainian region which he won. In October 2010, Baloga was appointed as the Minister of Emergency Situations (www.kmu.gov.ua).

During the second stage, Yushchenko undermined his prime minister’s 2010 election campaign. Yushchenko signed into law increases in populist social benefits that led to a suspension of the 2008 IMF Stand-by Agreement and signed last minute changes to the election law that increased opportunities for election fraud. In his final press conference, Yushchenko revived criminal charges from the Kuchma era related to Tymoshenko’s chairmanship of United Energy Systems in 1995-1997. The same charges were revived on October 12; the day after Tymoshenko was sentenced, by the Security Service (SBU). The intervention by the SBU Chairman Valeriy Khoroshkovsky is the latest in a string of similar steps that seek to destroy Ukraine’s European integration. In the second round of the 2010 elections Yushchenko called upon Ukrainians to vote against both candidates which only reduced Tymoshenko’s vote. Between the first and second rounds, Yushchenko posthumously awarded the nationalist leader Stepan Bandera with a state medal, which increased the anti-nationalist turn-out of eastern Ukrainian voters.

The third step in January 2009 was marked by Khoroshkovsky’s promotion by President Yushchenko to First Deputy Chairman of the SBU. Three months later Khoroshkovsky ordered the SBU’s Alpha Spetsnaz unit to raid Naftohaz Ukrainy’s offices over the January gas contract. The contract became the basis for the charge of “abuse of office” against Tymoshenko. Our Ukraine leader and former SBU Chairman, Valentyn Nalyvaychenko, said in an interview with Komentari on March 5, 2010 that “it would be personal satisfaction” if Khoroshkovsky was promoted to the post of SBU Chairman, “which he had recommended him for.” Khoroshkovsky became the SBU Chairman shortly afterwards.

Yushchenko’s anti-Tymoshenko vendetta has brought three negative consequences for Ukraine. First, it has led to widespread voter disenchantment and disillusionment in Ukrainian politicians, especially among former “Orange” voters. This has generated passivity among Ukrainians making it easier for President Yanukovych to roll back the democratic gains achieved in the 2004 Orange Revolution. Only 3,000 Ukrainians protested against Tymoshenko’s sentence – fewer in number than the Berkut riot police who had been drafted into Kyiv.

Moreover, Ukraine fatigue undermined Ukraine’s integration into NATO, which looked promising in 2005-2006. Khoroshkovsky’s SBU is a major factor in contributing to Ukraine’s democratic regression. Yushchenko’s support for Tymoshenko’s sentence undermines his claim to be a supporter of Ukraine’s European integration as the case has derailed the chances of Kyiv signing an Association Agreement.

Finally, Ukraine fatigue led most countries to initially welcome Yanukovych’s victory because they believed it would end “Orange” chaos and bring “stability.” Yanukovych was therefore given a long honeymoon period for most of 2010 during which criticism of democratic regression was mooted and phrased diplomatically. Political repression of dozens of opponents only led to negative consequences in EU-Ukraine relations after August 5, 2011, when Tymoshenko was imprisoned for contempt of court.

Yushchenko’s support for Tymoshenko’s sentence reveals political immaturity, a lack of dignity and willingness to prioritize personal revenge over Ukraine’s national interests. In 2006 and 2011, respectively, he has supported policies that have undermined Ukraine’s path to NATO and the EU.