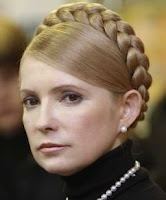 Viktor Medvedchuk will head the Ukrainian Prosecutor General's Office. "If I had been asked to comment on his [Medvedchuk's appointment as prosecutor general], I would have answered that he is a professional, a doctor of law who knows the whole system. If such a proposal [to nominate Medvedchuk for prosecutor general] is introduced, I think it will be considered positively," he said at a press conference in Poltava on Jan. 11.

Kravchuk also said that if Tymoshenko wins the election, the country's political system would function on the basis of the Constitution of Ukraine.

Medvedchuk headed the presidential administration of Leonid Kuchma in 2002-2005. He is currently a member of the Higher Council of Justice.

Oleksandr Medvedko has held the post of Ukraine's prosecutor general since 2005.
Kravchuk was the first president of independent Ukraine in 1991-1994.