The Ambitions Of A Would-Be Orthodox Pope 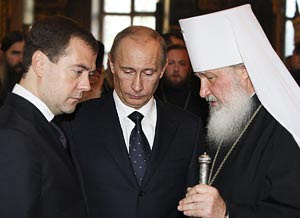 This is not simply because it's mid-summer and there is so little other news. It has become evident that the new patriarch adheres to a clear political line with regard to Ukraine, one that entails regular and lengthy visits -- and possibly even dividing his time between Moscow and Kyiv.

To understand why the patriarch is showing a level of interest in Ukraine that can hardly be compared with scant attention paid by his predecessor, Aleksy II, we need to look at Kirill's biography. He is almost certainly the most influential cleric within the Russian church today. Within the Holy Synod, none of the clerics of Kirill's generation can compete with him in terms of erudition, "media savvy," and administrative ability.

Email ThisBlogThis!Share to TwitterShare to FacebookShare to Pinterest
Labels: opposition

Will Ukraine Adopt a One Party System? - The Jamestown Foundation

Will Ukraine Adopt a One Party System? - The Jamestown Foundation


Will Ukraine Adopt a One Party System?

Ukrainian President Viktor Yanukovych (RIA Novosti)
The Ukrainian President Viktor Yanukovych’s team is tightening its grip on power. The opposition, still in disarray after Yanukovych’s victory in the presidential elections last February, has offered no resistance. More defectors from the opposition are joining the ruling coalition, some of them lured by the promises of several recently freed government posts. Meanwhile, the junior partners of Yanukovych’s Party of Regions (PRU), the Communists and Parliamentary Speaker, Volodymyr Lytvyn’s bloc, are losing influence within the coalition. Recently, the coalition rubberstamped a new local election law which leaves no opportunities for PRU rivals.
read more
No comments:

What Signal Does Washington’s Arms Embargo against Georgia Tell us About US Policy towards Ukraine?

Jamestown Foundation Blog: What Signal Does Washington’s Arms Embargo against Georgia Tell us About US Policy towards Ukraine?
MONDAY, JULY 12, 2010

What Signal Does Washington’s Arms Embargo against Georgia Tell us About US Policy towards Ukraine?

By Taras Kuzi
An illuminating analysis in the reputable British magazine Jane’s Defence Weekly (June 29) alleges that while the US denies it has instituted an arms embargo on Georgia, the reality is that one is in place. A Janes Defence Weekly (JDW) correspondent at the Eurosatory defence exhibition in Paris in mid-June wrote of the high level of frustration among Georgians seeking to buy defensive weaponry.

But, as JDW wrote, “representatives of US and Israeli companies stated that sales of defence equipment to Georgia remain obstructed by both US government policy and pressure from the Russian government.’ It remains unclear if the unofficial — and duplicitous – arms embargo was instituted by the previous George W. Bush administration or by its successor, the Obama administration.

The most unpleasant aspect of the unofficial embargo is that it is Georgia that is being punished, despite the fact that it was invaded by Russia and that two Georgian provinces came under Russian occupation. In other words, this is a similar US policy to that which punished Azerbaijan in the 1990s even though it had suffered an invasion and occupation of Nagorno-Karabakh by neighboring Armenia.

Email ThisBlogThis!Share to TwitterShare to FacebookShare to Pinterest
Labels: Georgia, Ukraine, US

Yanukovich Between a Rock and a Hard Place

Russia Profile - Between a Rock and a Hard Place

June 30, 2010
Between a Rock and a Hard Place
By Dan Peleschuk
Special to Russia Profile 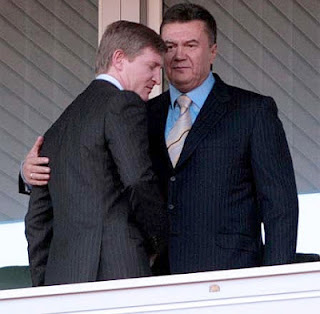 Since taking office in February, Ukrainian President Viktor Yanukovich has made it clear that he is shifting Ukraine’s focus back to Moscow. But the telling measure of just how far he’ll tilt may not be the deals struck with the Kremlin, but the creeping incursion of Russian business into Ukrainian industry, which now threatens one of his biggest financial backers.

Yanukovich’s first four months in office have brought rapprochement with Russia at lightning speed. On the heels of his seemingly Russophobic predecessor, Yanukovich was left with many fences to mend. But after allowing the Russian Black Sea Fleet to remain in Crimea another 25 years and signing bilateral agreements with Russian President Dmitry Medvedev in several sectors, relations seemed to be back on track.

Romanian Minister of Economy Adriean Videanu and Vlad Filat, the Republic of Moldova’s Prime Minister, have agreed on paper to link the two countries through a natural gas pipeline between Iasi and Ungheni. This project would allow gas delivery in both directions and aims to increase the two nations’ energy security. There is also another plan to build a 400 KV electricity inter-connection line between Romania and Moldova

KIEV - After years of animosity, relations between Ukraine and Russia are improving significantly. But not everyone is happy with Kyiv's new alignment with Moscow. Western powers are watching the deepening ties with concern.
In the months that have followed Viktor Yanukovych's election as president of Ukraine, the former Soviet state's relationship with Russia has been improving steadily. After hitting historic lows under Yanukovych's pro-Western predecessor Viktor Yushchenko's presidency, Ukraine and Russia are taking significant steps to cement close ties in economic and strategic areas after years of destabilizing animosity.

Email ThisBlogThis!Share to TwitterShare to FacebookShare to Pinterest
Labels: Donetsk

KIEV, Ukraine — Treading lightly on Russia's doorstep, U.S. Secretary of State Hillary Rodham Clinton praised Ukraine's new Moscow-friendly leadership for its pursuit of democracy, skimming over concerns about a rollback of liberties.
Clinton also said American companies have a "great opportunity" for fruitful investments in Ukraine, particularly its energy sector, although she also suggested that the country needs to get a tighter grip on business corruption.
At a joint news conference with President Viktor Yanukovych, Clinton said the Obama administration supports efforts by Ukraine to deepen its relationship with Russia, so long as it also remains open to closer ties to the United States and Europe. She also glided over a reporter's question on the impact of the Russian spy ring arrests in the U.S., deferring to President Barack Obama's statement that the U.S.-Russian relationship would be unaffected by the case.

Email ThisBlogThis!Share to TwitterShare to FacebookShare to Pinterest
Labels: Clinton, Ukraine, US

Today at 06:35 | Reuters
Secretary of State Hillary Clinton is expected to respond to a flurry of pro-Russian moves by Ukraine's new leadership by signalling renewed U.S. interest in the ex-Soviet republic during a visit on Friday.

Kicking off a five-country regional tour, Clinton arrived in Kiev in the early morning hours of Friday, the first trip to Ukraine by a top U.S. official since President Viktor Yanukovich was elected in February, ousting pro-Western leaders and tilting policy towards Moscow.

Email ThisBlogThis!Share to TwitterShare to FacebookShare to Pinterest
Labels: Clinton

The European Union should not narrow the scope of its foreign policy cooperation with Turkey and Ukraine at a time when those countries have shown a will to conduct foreign policies that are not necessarily in line with those of the EU, Enlargement and Neighbourhood Policy Commissioner Štefan Füle told EurActiv in an exclusive interview.

The new Ukrainian administration led by President Viktor Yanukovich has informed Brussels that there will be "no more automatism" for Ukraine to align with EU positions, Füle disclosed.

Email ThisBlogThis!Share to TwitterShare to FacebookShare to Pinterest
Labels: EU

ANDREW RETTMAN
29.06.2010 @ 09:29 CET
Ukraine has said the EU should play a role in any merger between its national gas distributor, Naftogaz, and Russia's Gazprom, a deal that could have profound political consequences.

"We are willing to consider it [the Gazprom merger], only if there's both a European and a Russian stake," Ukrainian deputy prime minister Sergei Tigipko said at a business forum in Moscow on Monday (28 June), according to Reuters.